"Wishing You Well"
"All That Glitters" is a SpongeBob SquarePants episode from season 4. In this episode, SpongeBob breaks his spatula, and is forced to replace it.

As the episode opens during an intense day at the Krusty Krab, a customer orders a Monster Krabby Patty and SpongeBob tries to make it flip. As a result, his beloved spatula, breaks in half which causes SpongeBob to start crying like crazy. With his favorite kitchen implement out of commission, SpongeBob searches for a temporary replacement. SpongeBob finds "Le Spatula," the latest in a state-of-the-art cooking tool. The sleek and modern Le Spatula dazzles SpongeBob so completely that he will do anything to own one.

After selling everything, including his clothing, a nude SpongeBob attains Le Spatula from the man from the store. He shows him off to Mr. Krabs, and, later, before he flips a patty, he refuses and comes to life. He says Krabby Patties are disgusting, and that he will only cook fancy food. He then suddenly grows robotic legs and runs off. Mr. Krabs confronts SpongeBob and encourages him to go get Spat back. SpongeBob runs off to the hospital, where old Spat lays. He suddenly runs out of life as SpongeBob watches, and SpongeBob cries in agony. Then the doctor appears, and, after some conversation, he tells SpongeBob that it is a different spatula, and that Spat is in the infirmary. SpongeBob runs over to Spat, but Spat turns away from SpongeBob, making SpongeBob burst into tears.

SpongeBob apologizes for buying Le Spatula, claiming it was his moment of weakness and he needed a replacement, but Spat ignores him. SpongeBob rolls in a fit of tears as he goes back to the Krusty Krab. He cries in the kitchen, but suddenly, he hears patties flipping and sees Spat flipping Krabby Patties on the grill, and he cries in joy. Apparently, he forgave him. Suddenly, another Monster Krabby Patty is ordered. The two try to hopefully succeed in flipping it. Suddenly, SpongeBob's arms break off and he ends up laughing, ending the episode. 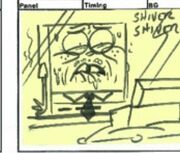 According to the storyboard, after Mr. Krabs said "Go before I lose all me customers," he would cry a tear drop saying, "Me money," then Squidward would ask "What happened?" and Mr. Krabs replies back "I don't know."