He is a gray live-action clam. After being captured by the Cyclops, he was outfitted with a black top hat and a pair of glued-on googly eyes.

In the concept art of the video game, a cartoon rendition of him appears. He is lavender with a wavy mouth and a taller top hat. 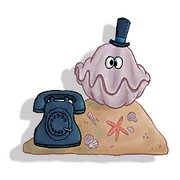 Add a photo to this gallery
Retrieved from "https://spongebob.fandom.com/wiki/Alexander_Clam_Bell?oldid=2917589"
Community content is available under CC-BY-SA unless otherwise noted.