A Pal for Gary

"Yours, Mine and Mine"
"A Pal for Gary" is a SpongeBob SquarePants episode from season 7. In this episode, SpongeBob gets another pet to keep Gary company while he isn't home, which proves to be disastrous.

The episode starts at SpongeBob's house, where he is feeding Gary. Afterwards, he has to leave for work, but Gary wants to go on a walk. SpongeBob tells him that he does not have time to give him one and sadly walks away to work, feeling remorseful that he had no time to hang out with Gary. As he goes to the Krusty Krab, he notices that Mr. Krabs refuses to give one customer service on account of him bringing his pet worm into the restaurant. This reminds SpongeBob of the fact that Gary is home alone with nobody to keep him company, prompting him to make a remorseful phone call reminding Gary that he will arrive home soon.

As SpongeBob gets off work at night, Mr. Krabs tells him that he needs help with loading coal out of the parking lot, but SpongeBob cannot help as he has to get back to Gary at home. Mr. Krabs lets him off the hook so long as he comes in work five hours earlier the following day to help with the parking lot. As SpongeBob is walking home, he notices a truck selling nudibranchs, which catch his attention due to their "cute" appearance. However, the lady selling them informs him of their danger (they are extremely vicious and hostile toward other pets, especially snails), but SpongeBob does not pay attention and simply runs off with a green nudibranch without paying for it, the lady commenting aside that nobody listens to her.

SpongeBob comes home and shows Gary his new playmate while he is at work; he names it "Puffy Fluffy," and places them next to one another to have them get along as he makes an enchiladas meal. Anytime SpongeBob is not present, Puffy makes blatant threats to Gary, but SpongeBob fails to notice the nudibranch's impending danger and instead accuses Gary of perpetrating violence against him or ignoring him. As punishment, Gary is put to sleep early tonight, next to Puffy Fluffy, then SpongeBob himself goes upstairs to sleep, berating Gary again when he disturbs him. Over the night, Puffy continues to threaten Gary as if he is going to kill him. Gary tries many defense mechanisms, but it turns out that Puffy Fluffy is stronger than him, making Gary more vulnerable to his abuse. They continue fighting throughout the night which eventually carries into the library, prompting a house fire made by Puffy Fluffy, who knocked over SpongeBob's fireplace, and SpongeBob does not wake up once.

The next day, SpongeBob wakes up to find that his house is a mess, and assumes that Gary caused it out of jealousy of his new "friend." He then walks into his exercise room to find Puffy Fluffy about to eat Gary alive, but, oblivious to the nudibranch's blatant abuse, once again accuses Gary of harassing him.

Puffy eventually traps SpongeBob as well, which gives Gary the idea to save him by getting out his lasso and freeing SpongeBob and intimidating Puffy, who runs off after Gary presents his defense. Despite this, SpongeBob still believes that Gary was responsible for Puffy Fluffy's violent behavior.

The episode ends with SpongeBob at work again, this time bringing Gary after the policy has been updated to allow animals in the restaurant so he won't be lonely anymore to his dismay. Mr. Krabs ironically hires Gary as the restaurant's second fry cook, as the episode ends. 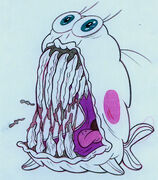 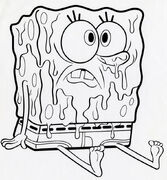 This image is from "Square Roots: The Story of SpongeBob SquarePants"