"A Friendly Game" is a SpongeBob SquarePants episode from season eight. In this episode, SpongeBob builds his own mini-golf course in his house. 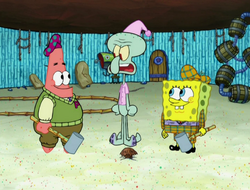 SpongeBob decides to end the game, but Patrick ignores him and enters Squidward's house to look for his ball. While searching, Patrick stops to rummage through Squidward's fridge and eats most of his food including some kelp salad, only to discover he has also eaten SpongeBob's ball, which was hiding in it. SpongeBob offers to get the ball out but he declines and tells Patrick he has to "play the ball where it lands." After hitting his ball out of Patrick's body, Patrick finds his ball stuck in his bum, SpongeBob reminds him again that he must "play it where it lands." Patrick gets a hole in one and SpongeBob tells him he could do it blindfolded, so Patrick hands him a blindfold. Patrick helps SpongeBob find his ball by playing hot or cold, but since SpongeBob can't see, he accidentally breaks Squidward's furniture and paintings. It turns out Patrick also took a shower in Squidward's bathroom while accidentally giving SpongeBob bad directions. Finally annoyed with Patrick's laziness, SpongeBob drags him out and they go off to search the house.

Production for this episode and its sister episode finished on January 10, 2011.[1]

Start a Discussion Discussions about A Friendly Game