The 4,132 twins[1] are anchovies who appear in the PC game Employee of the Month.

Throughout the game, SpongeBob encounters members of these twins once per chapter and can talk to them. SpongeBob is increasingly annoyed, confused, and frustrated by them not recognizing him, despite him thinking he met them before.

In the last chapter, it is revealed that they are thousands of identical brothers, and that SpongeBob met a different one each time throughout his adventure.

Appearances of the twins 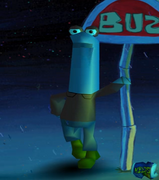 Retrieved from "https://spongebob.fandom.com/wiki/4,132_twins?oldid=3172773"
Community content is available under CC-BY-SA unless otherwise noted.