View source
If you were looking for the article about the book, then see My Happy Book: SpongeBob's 10 Happiest Moments.

Look back on SpongeBob’s important life lessons, like “when in doubt, pinky out,” relive his momentary joy as co-cashier and Salty Spitoon patron, and witness his star turn with a mop. This collection is a virtual bundle of happiness at your fingertips! 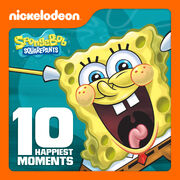