On MBC3, the episode titles and two parts of the theme song are localized in Arabic, with other instances of text untouched. On Nickelodeon, they air the original untouched.

From season 6, episode 115a. Scenes like this were censored already on MBC3. After Nicktoons Arabia launched, season 6 was aired uncut and was entirely re-dubbed.

"The Curse of the Hex" episode "Re-dub"

On Nickelodeon Arabia, most of the season 5 and 7 episodes aired late with a re-dubbed version because of all of the MBC3 censored version. On Nicktoons Arabia, all the episodes of season six were aired full and uncut (same actors - studio..etc.)

All of season 8 is re-dubbed and fixed, but some title cards had changed like "Frozen Face-Off." For the rest of the season, they kept all title cards as they aired on MBC3. The last episodes to be re-dubbed are "The Good Krabby Name"/"Move It or Lose It." 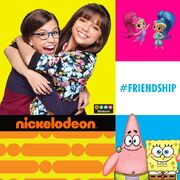 Funny Cooking with SpongeBob tweet
Add a photo to this gallery

Retrieved from "https://spongebob.fandom.com/wiki/سبونج_بوب_سكوير_بانتس?oldid=3395900"
Community content is available under CC-BY-SA unless otherwise noted.