Encyclopedia SpongeBobia
Register
Don't have an account?
Sign In
Advertisement
in: Pages with reference errors, Articles with multiple issues, Series,
and 4 more
English

Μπομπ Σφουγγαράκης (Bob Sfoungarákës) is the Greek dub of SpongeBob SquarePants. Episodes in Greece would initially premiere on Alpha TV's sister stations, Alpha Cinema 1 (featured on the now-defunct digital platform Alpha Digital) and Channel 9 (formerly called TVCosmopolis and Polis) until 2008, later on Star Channel, and currently on Nickelodeon's local station in Greece (formerly called LocalTV). The series is also available on Nick+ through the Cosmote TV (seasons 9-11, minus "Sanctuary!" and "What's Eating Patrick?") and Vodafone TV (seasons 7-12, minus all episodes that haven't yet aired on television, plus "Kwarantined Krab") streaming services. It is part of International SpongeBob SquarePants.

Note: "Kwarantined Krab" doesn't count on this list due to this episode being released digitally on Nick+.

Burger Beard: "Κίτρινος είναι και είναι μπελάς!" (He is yellow and he is in trouble!)

Main article: List of DVDs (foreign)/languages/Greek
ODEON S.A. had released 13 DVDs in Greece with episodes of SpongeBob SquarePants, from seasons 1-3, except the 12th (with the season 6 special episode, "SpongeBob vs. The Big One") and 13th (with the season 5 special episode "What Ever Happened to SpongeBob?"). Also, English and Greek audio tracks were featured, alongside Greek Subtitles. ODEON is also responsible for distributing films released by Paramount Home Entertainment, including the SpongeBob movies.

Collectible entire season DVDs have been produced by Pedio Editions. Seasons 1–4 were initially issued as a supplement in the magazine Tiletheatis, while seasons 5–8 were first published in the newspaper Eleytheros Typos tis Kyriakis. Except for seasons 7 to 9, which were divided into nine CDs each, each season was divided into eight discs. In addition, the seasons 1 to 3 DVDs would be re-released in small markets in 4-DVD bundles for a total of 10 euros. The 9th Season 7 DVD and the 9th Season 8 DVD were also sold (in collaboration with The Penwest Company) in stores, particularly supermarkets, for the usual price of 2 euros. [7][8]

A VCD called Το Πάρτι του Μπομπ Σφουγγαράκη (SpongeBob's Party) was published as a gift with the purchase of the Greek SpongeBob magazine.

In 2014, further books were released by Pedio Editions.

LEGO, Imaginext and Mega Bloks products have been released in Greece.

In February 2007, SpongeBob appeared on the packaging of EVGA Folie Croissants, Nestle Laky Boy ice creams in May 2013, and Laky Cap ice creams in May 2014. The latter would include surprise items inside the caps, such as figurines, brelocks, stickers, and so on. [9][10][11][12] 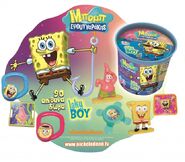 Greek food company Melissa S.A. released the Melissa "Pasta Kids" brand in 2009, in which pastas would come in different shapes, showing kids-related things. A variant of the product was released, where the pasta would represent the main characters. In February 2015, Melissa would hold a contest of The SpongeBob Movie: Sponge Out of Water, with the prizes being SpongeBob-related.[13] 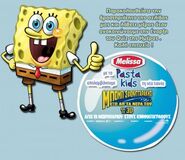 During airings of the series on Channel 9 in 2007, the National Council for Radio and Television started investigations regarding a claim made by one of its members, in which he says that "the show contains violent scenes for children."[16]

The reaction of audiences and fans of the show in Greece was rather negative, with people criticizing the fact that NCRTV was focusing on "mindless" children shows, and not on other "awful" at the time, shows on TV, and saying ironically that NCRTV should also ban other cartoons.

Despite the Council taking action in order to ban the cartoon on the network, the exact reason for the cancellation of airings there till this day, are unknown.

Later, a child's mother did a report about the censored scene at the radio series of the same name, because her child was watching that. The radio series host tried to say that NCRTV has claimed that the series is for adults (as it has also claimed that it has violence and sexual references).

In a speech of Alexis Tsipras, chairman of SYRIZA (Coalition of Racical Left) and former prime minister of Greece, in 2013, about the transmittion of the newly-founded at the time station that was about to completely replace the Hellenic Broadcasting Corporation, NERIT (New Hellenic Radio, Internet and Television), he told that "You illegally emitted from a private studio a pirated signal that exposes the country internationally, with aesthetics referring to the Soviet Union channels of the 1970s and to Bolek and Lolek cartoons."

KKE (Communist Party of Greece) responded to the speech, saying:

But what do Bolek and Lolek have to do with that? [...] You should know that the Polish boys Bolek and Lolek, are one of the best in children's entertainment. Cartoons far superior than any pedagogical point of view, displaying ideals and values ​​particularly beneficial to young children who build their personality.
PS. Does Mr. Tsipras prefer today's modern capitalist animation industry trash that shows competition and violence? Is SpongeBob, who always serves his boss Mr. Krabs who oppresses him and exploits him, his role model?[17]

Due to NCRTV and other television content rating system companies from other countries growing stricter over the years, the following episodes no longer air as normal on Nickelodeon Greece's Free-to-air television channel, which led to them either airing at a later time with a stricter rating (for example, "Ghoul Fools," which was premiered in the time of 10:00 PM) or even being completely skipped in future reruns. All these episodes are available without any restrictions on streaming services and home media releases.﻿[citation needed]

"Mid-Life Crustacean" still airs as normal on the channel, despite being permanently banned in the United States due to the scene where SpongeBob, Patrick, and Mr. Krabs partake in a panty raid.

The promo for the airings is done by Athens-based company XYZ Productions,[19] and Sandy Cheeks is played by Georgina Razack,[20] the female narrator for most Nickelodeon Greece promos.

Greek poster for The SpongeBob Movie: Sponge Out Of Water, featuring SpongeBob as Zeus

Greek poster for The SpongeBob Movie: Sponge Out Of Water